Have you ever wondered how and why crossing the exact same combination of mares and stallions doesn’t result in offspring with the same traits?

Welcome to the EXCITING world of Dominant and Recessive Genotypes!

There is however, a way to determine the odds.  Many believe that stallions have the most influence in the outcome of the cross, but this is false.  Mares and Stallions have an equal 50/50 contribution to the resulting babies traits.

Crossing the same stallion and mare multiple times can get you entirely different resulting offspring in every possible trait depending on the Dominant and Recessive Genotypes.

The Punnett square (click to read more) is a square diagram that is used to predict the genotypes of a particular cross or breeding experiment.  Genotypes are the genetic constitution of an individual organism.

It is named after Reginald C. Punnett, who devised the approach. The diagram is used by biologists to determine the probability of an offspring having a particular genotype.

The Punnett square is a tabular summary of possible combinations of maternal (Mare) alleles with paternal (Stallion )alleles.

When we make our Punnett square, you can see the odds of the resulting cross having “Good Bone” if a dominant genotype (Capital Letter) is present in the crossing of the genetics, the cross will show that genetic trait.

One often overlooked aspect of this is that genotypes are also linked to XX (female) & XY (male) chromosomes.  This means that a stallion and mare combination can produce completely genotype combinations in colts and fillys.

The only variable not taken into consideration in the Punnett square is genetic mutation.  There is no way to calculate that into the odds, so it is not considered in the calculations.

In the example I used here, I gave the Stallion a dominant and recessive gene and the mare 2 dominant genes on the XX (filly) chromosomes.

This gives you the ODDS of the trait showing up in the resulting cross and also the odds on carrying that trait on again through its own future genetics.

I was very fortunate to learn of this in high school biology, from a great teacher who had an amazing sense of humor.  I can picture it now, thirty 16 year old students sitting at the lab tables in biology, crossing the genetics of blue eyed circus clowns with brown eyed trapeze artists and figuring out the resulting odds of their offspring having brown or blue eyes.

Mr Cantolla (rest his soul), did us all proud in his ability to make biology interesting and this lessons are as clear in my head today as I write this, as it was around 23 years ago.

There is no way to know 100% if the crossing of a mare and stallion is going to give you what you desire in baby colt without having a deep genetic analysis done.  In humans there are DNA and genetic comparative marker studies done, so they can pick out the traits with DNA, but the database just doesn’t exist in horses.

With the “Good Bone” combinations I used as examples, the fillys (Pink Square) born would have 100% odds of having good bone themselves.

You only need 1 dominant genotype to be born with the trait.

You need Double Dominant to have the trait and have the 100% chance on passing that on to the next generation.

Of those born, they would have a 75% chance of birthing offspring with the same traits again because all of the offspring carry at least 1 Dominant genotypes . 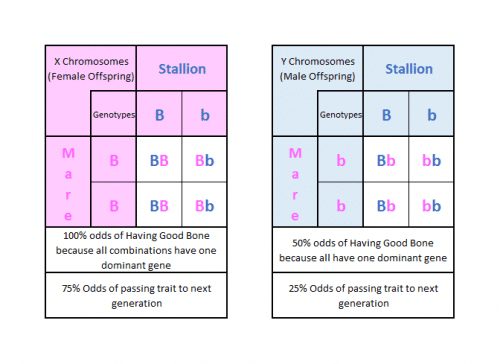 When a trait is exhibited, there is for sure 1 Dominant genotype present, but trying to figure out if that offspring is carrying 2 dominant genes takes some research and you need a quantity of resulting offspring to figure it out.

Our family has a great example of this with Red Hair.

My Dad has Red Hair, so do I and so does 1 of my sisters.  I also have a sister with blonde hair.

This means that although my Dad had red hair, he didn’t have Double Dominant genetics and my mom must have had either 2 recessive or 1 Dominant and 1 Recessive genotype with Red

Hair because it has only carried to the second generation 1 out of 5 times.

The bigger point I am trying to make here is: just because you exhibit a trait yourself doesn’t mean you will necessarily carry it on.

With the practice of embryo transplants becoming more mainstream, people are finally starting to pay more attention to the mares genetics and following along more closely to maternal lines.

Until this existed, it was so hard to find out if a mare had double dominant genetics because it took years to follow what the resulting babies looked like and unless you were able to purchase of package of mares that were bred the same on the top and bottom side and some that were the same on one side and not the other, and closely tracked the offspring, but this can get really hard to follow.

If you every have a chance to visit with an older racehorse gentlemen who knows pedigrees, do it.

These old school guys who knew their top and bottom lines inside and out.  They followed the breeding closely and the resulting foals and they knew what the “Magic Crosses” were.

Those people also exist in the barrel horse industry, although they are few and far between and often over looked.

Certain combinations of traits follow each other in conformation as they put form to function.  One of the most overlooked trait in the barrel horse industry is a strong well sloped shoulder.

The Azure Te Line is one I have followed for years.  Azure Te might have one of the most round muscled shoulders of any thoroughbred in the industry.  He had a 2 to 1 strength to length stride ratio, good bone and body connections found mostly in a quarter horse.

His skeletal ratios were surely double dominant, because any documented sons I can find over time exhibit the same traits AS WELL AS many of the sons-sons.

If you know a stallion is Double Dominant in a desirable trait, it certainly makes the mare less relevant as you know you have a 100% chance of getting what you want in the first generation.  Recessive genetics for different skeletal ratios would only start showing up in the second generation.

Fire Water Flit, Strawfly Special, Jet Deck are other sires who I have considered “Sire’s Sire” because they stamped so many offspring with identical ratios.

Their offspring were also able to stamp their babies, showing the valuable Double Dominant genotypes.

Dash Ta Fame and the absence of the Double Dominant Genotype.

First Down Dash is a prolific stallion producer,  but interestingly, his most famous son is not – Dash Ta Fame.

Dash Ta Fame was one of the first Stallion in our industry who had an owner that understood putting money into stallion marketing and he came of age when the internet was getting booming.

While he surely carries some dominant genotypes that has created success in the barrel pen, if you took the number of colts born and the number of successful horses campaigned, his numbers aren’t as great as they at first appear to be.

He also has a lot of undesirable dominant genotypes that shows up too often, which is degeneration in lower limb joints like ankles and hocks.

What he should go down in history for is the virility and quantity of his semen!  I don’t know that there will be another stallion in history that will ever compare to that!

As a person who has worked in the accounting industry most of my adult life, how equistats reports earnings can skew the success numbers.

If you do not take into account the whole picture (how many foals there are and how many are successful), you can really throw the results, but this will be a whole other topic for another day 🙂

Orginally published on The Take Time off the Clock site Jan, 2019