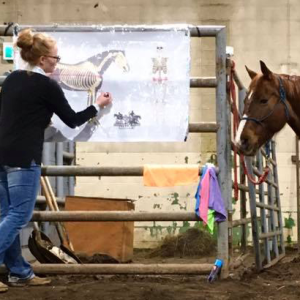 Walking your way into a Winning Run

I would like to talk about one of my successes with helping someone and one of the biggest reasons I decided to make my “learnings” into this program.  Monica Sem is a partner in Intervaltiming.com.  She was a customer first and we got to know each other over the years and I thought she would be a great fit for the business.  Monica has been around horses her whole life, started out in the show ring and then progressed to the barrel pen.  I went to her house in North Dakota with the intention of training Monica to do the Intervaltiming but the trip turned into much more than that.

I had been studying since starting intervaltiming, but it took me awhile to find courage and conviction in my voice to share my knowledge.  When I started travelling to events, I would passively ask customers buying reports if they had looked at reports before.  If they had, I would just hand the reports over, never offering to interpret the data with them.  I am not passive by nature, but there were times in my life where I thought because I hadn’t had a lot of wins in the barrel pen myself, this meant what I had learned wouldn’t mean anything to others.  Don’t worry, at this point in my life I have no doubt that it has zero relevance.  After listening to enough people interpret their reports incorrectly, I found my courage and voice and started telling people what their reports were telling them, whether they wanted to hear it or not.  I didn’t care what the riders name was on the paper, I just called a spade a spade and told these riders what the reports said.  I have had great conversations with every level of rider because of this.  NFR competitors like June Holeman, Linda Vick, Kathy Grimes, Amberleigh Moore, Sherry Cervi and Tana Poppino have all bought interval reports (just to name some of the most memorable visits I have had off the top of my head).  If a report showed someone was going to the 1st barrel too fast, I wasn’t passive anymore and pointed that out.  I popped riders bubble ideals about a tight turn being a good thing and started speaking my piece.  I also started sharing random bits of the knowledge I had gained on the circles, lines and paths being related to conformation.  It was frustrating at first, as I could see people were dismissive of what I was saying, but without realizing it, I was planting seeds of thought.  I would go back to the event the next year and people would come back and tell me they thought I was crazy for saying it at the time, but after it sunk in, they made some changes in their run based on the information myself and the report had given them and they started clocking better.

Back to North Dakota:  Monica is a super scholar.  She is someone who takes detailed notes, studies the information given to them and digests it thoughtfully.  She asks a lot of questions and makes sure she understands what you are teaching her.  This is always a best cased scenario when teaching someone.  The questions they ask you, help you explain things in the manner and details they need to succeed.

The first thing we worked on was getting Monica to focus and redirect her physical and mental energy on her horses body and feet and away from the bit, face and neck.  We drew the triangles on her horses and center of balance lines.  Monica had 2 barrel horses at the time and they were built entirely different in their ratios.  One mare (Boots) was bought as a 6 year old and had some limited success with previous rider, the other mare (Sukki) Monica had from a colt.  Over the course of a few days, we adjusted Monica’s seat position and where she was focusing her energy and attention.  I showed her slouch spots in her horses top line and sore muscle spots in her horses neck from asking them to move improperly and explained it was very reversible by correcting their movement.  I told her the best way to rewrite both her and her horses muscle memory, was to walk.  Not lolly-gag or meander, but walk with intention and purpose, with hind end engagement pushing the body forward, proper body collection and a lifted sternum, only using the reins and bit to add some direction to the movement or path, nothing more.  A horses head and neck are designed to move 100% independent of the body, but we can interrupt their proper movement 100% by putting too much concentration on the bit and face.  This blocks their natural flexibility, strength, movement and makes their body to travel in a way it is not designed for.

I banned Monica from trotting.  I actually ban anyone I work with live from trotting to start with.  Of all gates, trotting does the most damage to a horses body if the muscles aren’t previously warmed up, the core body position isn’t strong and the horses movements aren’t in sync.  The only time you should be trotting is if all of the muscles from the nose to the tail and down to the feet are warmed up, you can sit the trotting (not post) because it is strong, smooth and steady, the left and right sides are 100% in sync and your horse is following through with a complete movement in their stride front and back.  Trotting to warm up muscles is counterproductive.  You should trot because you have warmed up the muscles already, not the other way around.  Walking engaged and strong with full strides and no contact on the horses mouth is the best way to warm up all of the muscles on your horses body, which will give you flexibility through the topline and ribs and get the blood flowing.  The head and neck will then become soft, flexible and workable as a result of this.  Your horse should also never trot a small circle.  It is a 2 beat gate and for your horse to use their full stride, keep their spine and body in alignment, they cannot turn a small circle and use their body properly in the trot.

Monica took this project to task and consciously and purposefully walked with energy and intention, devoting her mental and physical strength to directing her horses feet and bodies around the new pattern we gave her, that was made up of straight lines and circles that matched her horses stride length.  She concentrated on making sure they were stepping through to their center of balance and kept the radius of the circle in their vertical center of balance.  She did this for a few weeks.  She accomplished a lot in this time.  She walked her way into sounder horses.  Her chiropractor noticed it immediately and he asked her what she had done differently because her horses had never looked better.  In a few weeks of walking the pattern and loping in the field, Monica had changed both of their toplines and necks.  Monica then decided to enter a race.  She was a bit nervous as she had been concentrating on walking and not traditional conditioning but thankfully entered anyways.

Monica placed 2nd and 7th with her horses at a tough outdoor race on a standard set.  Previous to this she was consistently 3D with occasional jumps up to the 2D.  Her and her horses so strongly rebuilt the foundation of their movement and paths that it was one of the easier runs she had ever made and both horses shut off the clock.

Back To The Members Community...

Click here to go to our members community page